Badger
25 years in the Emblem business. I make emblems and restore them. Aka, Ray Geschke 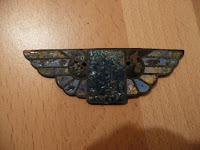 Hello, could you tell me please if this is a car badge or tractor badge, i dug it up in my garden which used to be part of a farm. Its 3.75" long x 1.25" and has unreadable text at the top and bottom of the center blue square. Hope you dont mind me asking.
Thank you, David

Badger: No idea on this one. Maybe someone will know and reply.
Posted by Badger at Wednesday, November 03, 2010 No comments: 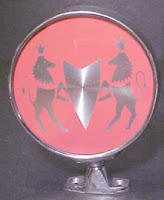 I don't know if you can help me but this is driving me crazy! I am not a collector of automobilia, just found this side mirror at an estate sale and thought it was interesting; might put it on Ebay. I have searched every website for hours and hours and not found this emblem - is it a real auto emblem? or someone's personalized car part? Can you help? Thanks in advance
Posted by Badger at Thursday, June 10, 2010 1 comment: 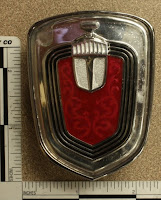 The emblem in this picture was submitted by a local police department in Wisconsin. It was in the possession of young thieves that would steal the badges and hood ornaments off of cars. We want these badges to get back to their rightful owners, but this badge was unidentified. I have never seen this one myself, nor does it have any familiar symbols. Does anyone out there have any ideas? Reply to this post as "anonymous" and there is no need to sign up.
Posted by Badger at Tuesday, May 18, 2010 1 comment:

This little item has me in a quandry, and any help y'all can provide would be fantastic. I am attaching two photographs with a penny as a size reference, and I hope it shows enough detail. I Googled this thing for hours, including international manufacturers, toy manufacturers...everything, to no avail.
Posted by Badger at Tuesday, April 27, 2010 No comments:

I'm hoping you can help me identify the chrome auto emblem I have. I have been told it's a

1936 LaFayette hood ornament, but I haven't been able to find a photo of a '36 LaFayette model that sports this exact hood ornament. I initially thought it might be a Locomobile ornament, due to the fact that it prominently features a fancy script "L" inside a circle, which is almost identical to the script "L" logo that Locomobile used in their later advertisements. However, as you can see, my ornament has a distinctly Art Deco design theme, which wasn't incorporated into most auto emblems until the mid-1930s or later, and Locomobile ceased production in 1929. If it is a LaFayette ornament, it seems curious that it would incorporate a style element used by an auto marque that was a competitor to LaFayette when the original LaFayette company (pre-Nash) produced high-end autos for a short period in the early 20's.
The ornament is exactly the same on both sides, which lead me to believe initially that it was a hood ornament. Unfortunately, it appears to be missing a lower piece, where it attaches to the hood, but that part is likely a narrow plate that attaches to the hood, and can probably be fabricated. Once I am able to identify the year and make/model, I am hoping to offer it for sale to someone who may be looking for such a rare piece of auto history.
Posted by Badger at Sunday, April 04, 2010 1 comment: 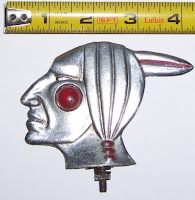 From Phil in Ontario, Canada: Could you please help to identify the year or the origins of this pontiac hood emblem, also this "m" probably mercury hood ornament. The pontiac emblem was found in an old timers mechanics chest that i bought in an auction about 20 years ago.

Badger: I've never seen these emblems either Phil, but I think I agree with your guesses. Maybe someone will step forward with an answer!
Posted by Badger at Monday, March 22, 2010 1 comment: